Why is the connectivity of deep-sea communities so important?

As we sit on the ship and watch the amazing images of deep-sea life many hundreds of metres below us, it’s easy to forget about how crucial the connectivity of this undersea world is.  But why is connectivity so important?  Picture a fruit tree growing in the garden and its need to be pollinated by bees in order to produce fruit for us to eat.  While the bees may transport pollen for many miles between fruit trees, if the distances are too great, then pollination won’t happen, we won’t get fruit and the potential for new trees to grow from the seed of this fruit will be lost. Therefore, spacing between the trees is crucial for bees to cover the distances between them.

This analogy works as well in our marine world, where we have a network of marine protected areas (MPAs).  In these MPAs, habitats which are vulnerable to human activity (such as fishing) are largely protected.  With many marine creatures living in these MPAs being sessile as an adult (this means they tend to live attached to the seabed), the transport of their larvae, which drift on ocean currents to other suitable habitat, maybe to another MPA, is crucial.  This being said, the spacing of these MPAs and distances between them, bearing in mind direction and strength of ocean currents, is paramount. After all, these MPAs are not only in place to protect species and habitats but also to maintain the connectivity between species populations across the MPA network. 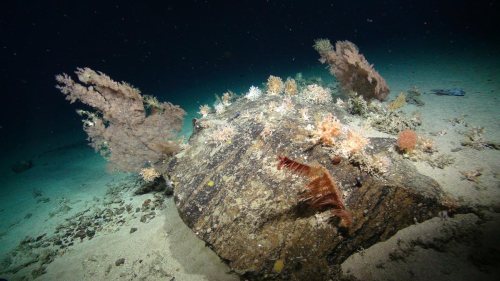 Sessile organisms on a rock outcrop in the deep sea

It is often said that humans know more about the surface of the moon than about the deep sea.  We certainly know very little about how populations of deep-sea habitats in UK waters, such as cold-water coral reefs, are connected.  One of the primary goals of the project we’re working on is to look at the deep-water MPAs in the UK seas west of Scotland to see how connected the animal communities living in these places really are.  The distances between these MPAs are vast, with some more than 500 kilometres apart, and complex models have been developed, which predict ocean currents and the subsequent transport of larvae between these MPAs.

On this survey, we are collecting genetic material from a range of deep-sea organisms as well as filming them in-situ using the ROV (remotely operated vehicle).  This information is fundamental to our understanding of how related populations of marine life, such as corals on Anton Dohrn Seamount are to say the same species living on Rockall Bank or Rosemary Bank.  If these populations are related, then we have some confidence in the populations’ ability to ‘re-seed’ themselves, for example if there was some catastrophic event (such as disease or damage) at one of the MPAs eliminating the local population of a particular animal. 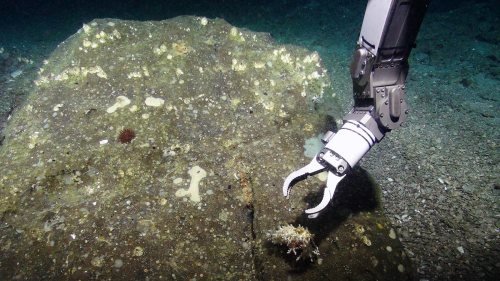 The results from this research will be crucial to developing our knowledge of how deep-sea communities are connected as well as helping us understand the effectiveness of the MPA network.

This entry was posted in DeepLinks Project Blog. Bookmark the permalink.

2 Responses to Why is the connectivity of deep-sea communities so important?